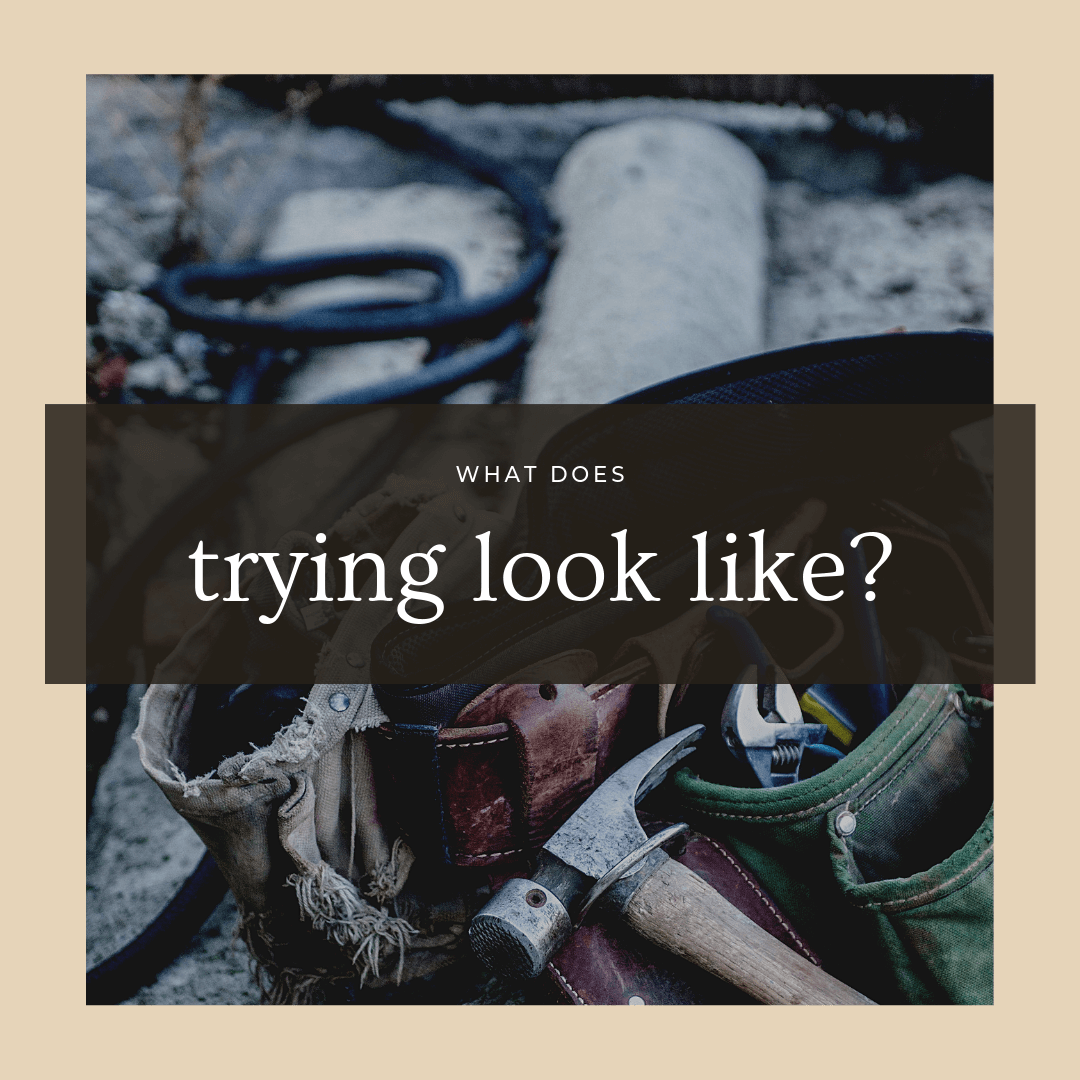 I know that I’m going to get the question so I figure I may as well go ahead and address it. I’m pretty open about the poor relationship that I have with my own mother, and I know someone is bound to ask if I think the Conversation Journal could have helped us. Sometimes, as I’ve gone through this journey I want to say no way there are too many problems between us, but if I’m honest my mom and I had a form of this when I was young.

The year was 1990 something and I still believed in Santa. Long before Elf on a Shelf, my first-grade teacher Mrs. Feather had a little elf that came to our classroom in the month of December to keep an eye on us. I was always wildly caught up in the fantastic and the romance of a good fairy tale. I’m sure my mother could see the light in my eyes as I came home every day to enthusiastically report on the activities of our classroom elf.

I think this must have been what inspired my mother to start writing to me as the elf named Gwendyl. I’m not sure exactly how it started out but a tradition began that carried on until I was in sixth-grade. Gwendyl would arrive sometime after Thanksgiving. I’d find a little note card somewhere in my room with greetings from the little elf and report on what Santa thought of my behavior from the year. I would write him back and give him gifts of stickers and miniature toy items. Between the start of the letters and Chrismas morning, Gwendyl and I would have written dozens of letters to each other.

Through my parents' divorce when I had no one to talk to, I confided my heart to the little elf holding back nothing. I told him of the bullies at school that were picking on me. I opened my heart about everything I had kept inside for the other eleven months of the year. My desire to move out or run away. As I got older and started to question whether or not Santa was real and if the elf was in fact real he would write to me about all the kids in California (I wanted to move away from my mom and live with my grandparents in California) who had stopped believing and how they were sapping the magic out of Christmas. He’d tell me about how you didn’t get Christmas presents anymore if you stopped believing. In short, Gwendyl guilted me to believe Santa for far too long.

In sixth grade (yes I said sixth grade), we were given the first graders’ letters to Santa and asked to write back to them. I was horrified by the act of lying to the first graders and was ranting to my mom about it. I asked her if I could just send the letter to Santa instead of lying to the poor kid. It is a moment that shaped me. I can remember exactly where we were driving and how I was sitting in the car. Corner of Forest Meadows and Beulah in front of Coco’s always feels a little drained of hope to me because that is where hope and magic died for me. That probably sounds dramatic but it felt dramatic.

My mom quietly said, “I suppose it has gone on long enough and I’ve got to say goodbye to the Gwendyl act, but Santa isn’t real and Gwendyl has been me this entire time.”

I had bared my soul to that elf, I had asked her on many occasions if she was Gwendyl. My trust was completely broken and shattered. Now we weren’t on the greatest footing already, but this destroyed any last vestiges of respect I had for her. It was literally a tailspin downward in our relationship after that.

Do I think that a Conversation Journal could have helped us? Yes I do. The first section of the journal parents and children lay down ground rules for the journal and that is designed to prevent the trust from being betrayed or broken. You might want to skip over this part as I’m sure it could feel like the hardest part of the journal, but it is there to protect the relationship. Had my mom and I been on the same page about our letters to each other, had there been transparency and boundaries I do believe that for me, writing to my mom would have been a better way for me to continue conversations with her.

Now there are some mental illnesses involved in our relationship so I’m not sure if we could have ever been as close or open as my heart desired, but I do think that written conversations would have been the best way for her to connect with me. Gwendyl proved that I was willing to open up in writing way more than I ever was verbally. I have never been a huge talker, I have bursts of talking, but then I need recovery time because talking is very draining for me. I’m sure there are other introverts out there that are the same way.

Now the Conversation Journal was designed, initially, for me to continue talking with my oldest daughter when we couldn’t logistically talk with each other. She is a talker and I love her little heart, but at the end of the day, there are 4 other kids that have to be put to sleep that also want to talk to mom. I don’t have the capacity to sit and talk with each of them for an hour or two before bed. We’ve built rhythms into our family of each child having a special one on one time with me and Jason but realistically it can’t be every day. The Conversation Journal allows her and now my sons as well, to continue talking to me when life prevents us from having verbal communication, and I can respond to them while they are at school and I have more leisure time for such things.

I love that they want to talk to me. It is a strange sensation to have them fight to talk to me as I don’t remember ever wanting to sit and talk with my mom, or at least when I did it was always followed by an apprehension that prevented me from speaking up. I am in way over my head and have no personal experience with this. The Journal and the podcast are tools I use to help equip me for this load I carry and I hope that they can benefit others because I’m betting I am not the only person who feels this way when it comes to talking with their kids. 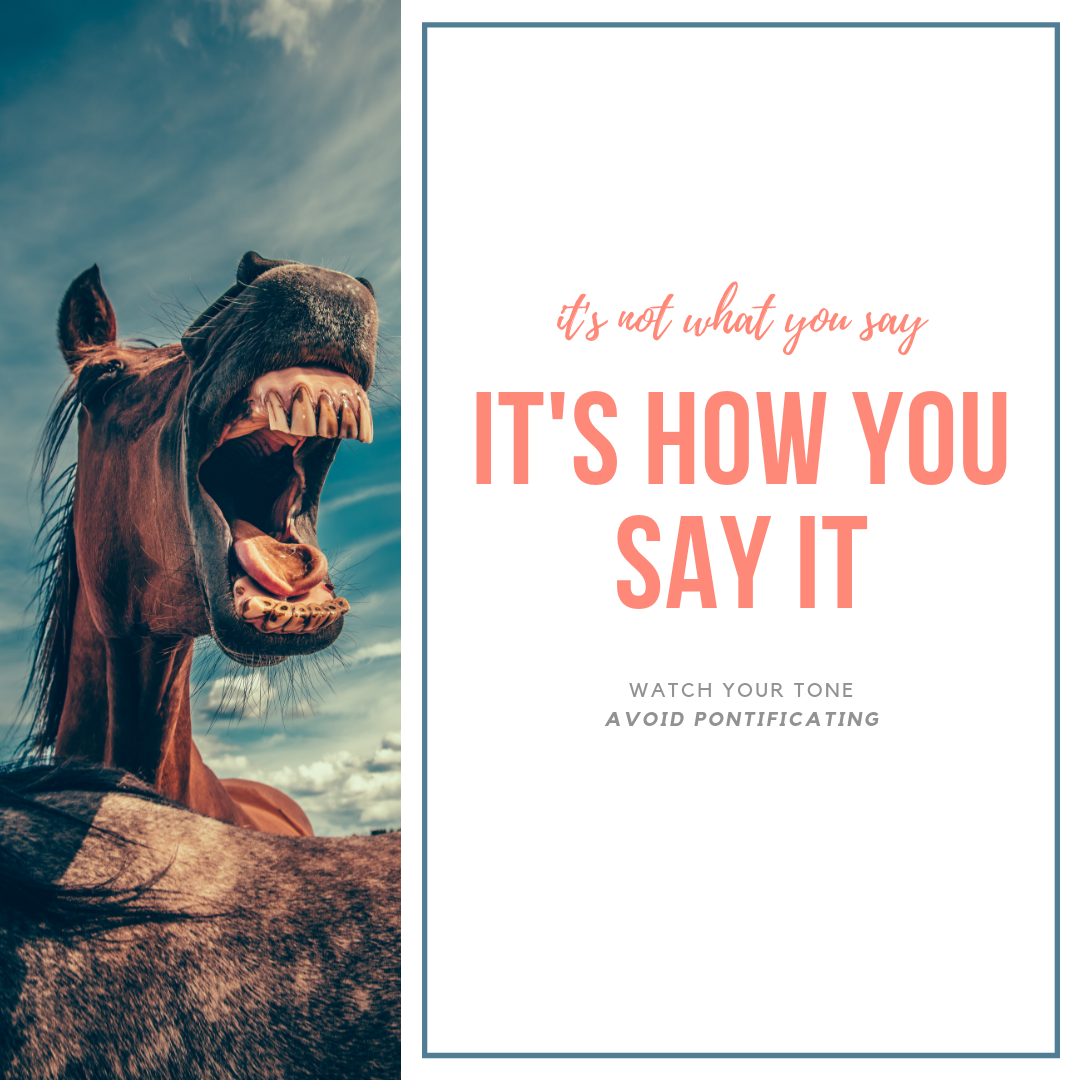 It is a deadly sin in today's world of social media and blogging. This word can really affect how we communicate with our children, and if we do it, we run the risk of damaging the relationship and shutting down the conversation.

To pontificate is to express one's opinion condescendingly or dogmatic manner. The fact that we know more than our children doesn't impress anyone, and we certainly won't impress them if we pontificate to them. It isn't always in what we say, but how we say it. 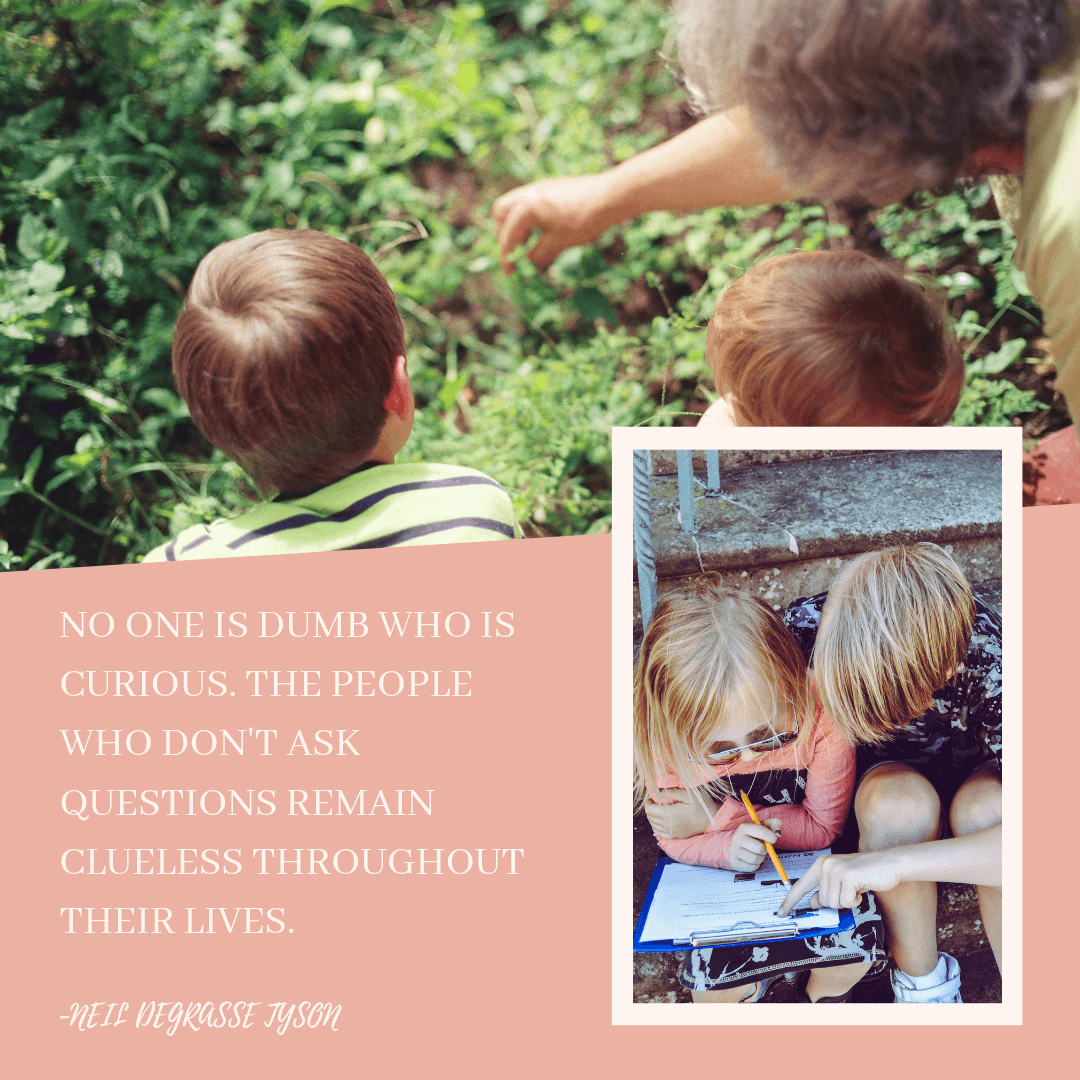 A quick tip on asking questions. Open-ended is always better and will yield better answers; however, not all open-ended questions are equal. Avoid using strong words because these are the words that your child will respond to and perhaps not the question itself. For example, "You must have been angry when that happened, tell me about that." Your child is going to tell you about feeling angry in that situation even if fear was their strongest emotion. 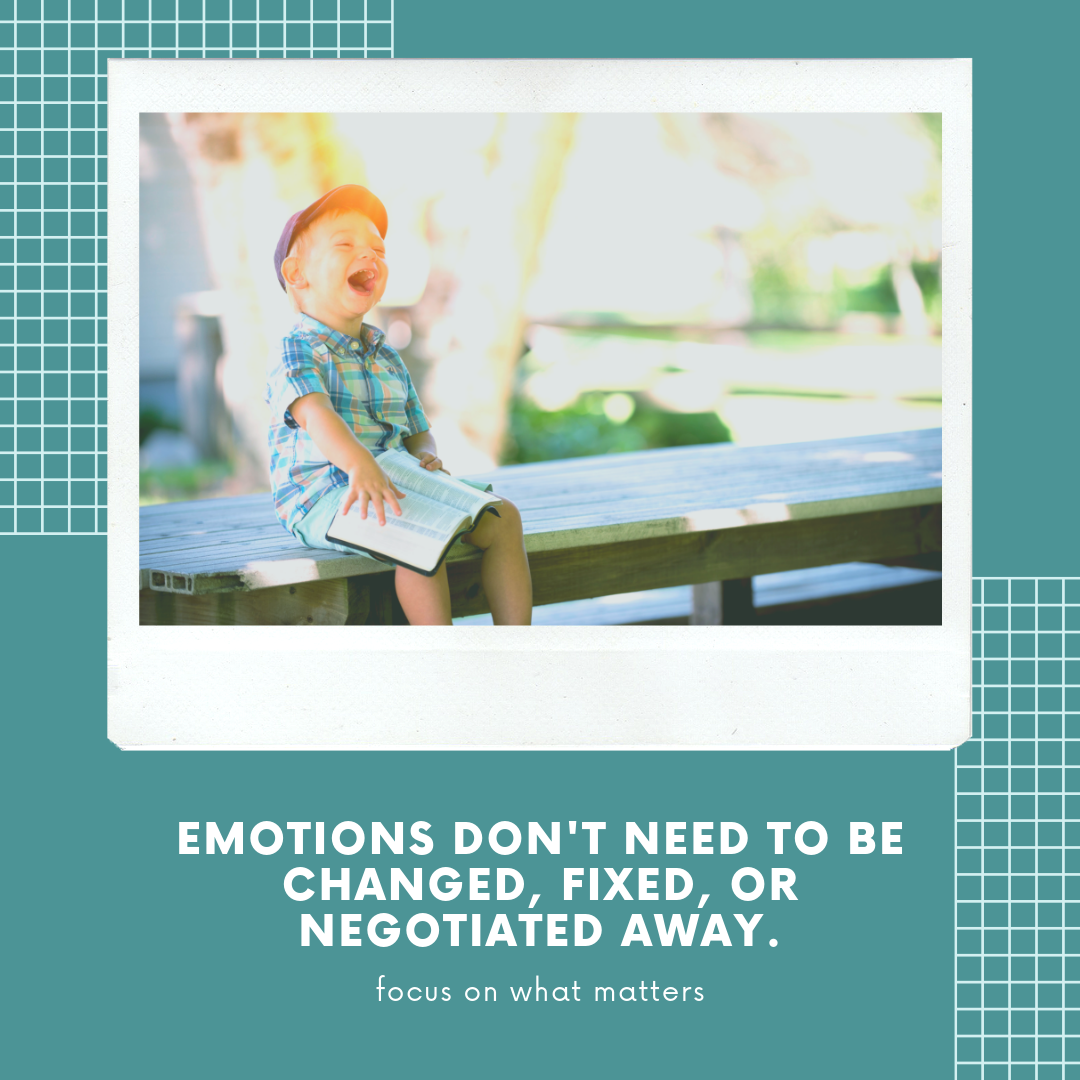 Emotions, they color our thoughts, words, and actions, and we all know that is definitely not a good thing in most cases. The use of The Conversation Journal will give a buffer between your emotions and your responses, but that might not always be the case.  So how do we approach emotions in a conflict situation?

Emotions are often involuntary responses, which means they happen without our conscious effort. With time our emotional reaction to an event can change as well. Because they can change, we have a tendency not to treat them as concrete; however, when handling conflicts, it is important to do the opposite. The emotional response someone has in a conflict is real and felt no matter how much we agree with that response or not. When addressing conflict, it is crucial to avoid attacking emotions. Treat them as a fact and not something that needs to be changed, fixed, or negotiated away.

There is a popular older formula for conflict resolution where one uses "I" statements, (when you did X I felt Y). I do not like this approach. Obviously, it must have some merit because it is still taught in basic conflict management classes. For children, I find it is not helpful. It allows the child to put the responsibility of their emotions on the other person. I have 5 young children, and with all of them that have used that formula, they have had a tendency to place the blame of their emotional response on the other person.

In our house we try to use another formula, also taught in conflict management classes "cause and effect" statements. For example; when you did X here is how it affected me. Once the child has then solved the conflict that arose from that we can individually address feelings; when affect X happened, I felt Y, and I chose to do Z. We have found that this approach helps our kids own their own roll in their emotional response as well as the actions that then come from that.