Paying off our Student Loans

I can hardly believe it is over and I have no clue what it actually means to no longer have student loans. For the first few years of our marriage, we were broke college students and then we were broke college graduates paying off our loans. The reality of what it will mean to have that money available for things like retirement savings and family vacations is unfathomable

This has been a tough journey, a long journey, a journey that has required sacrifice and dedication. I have at times doubted whether or not I had what it would take to cross the finish line. Let’s take a look back at the starting line though to get a full picture of the story. 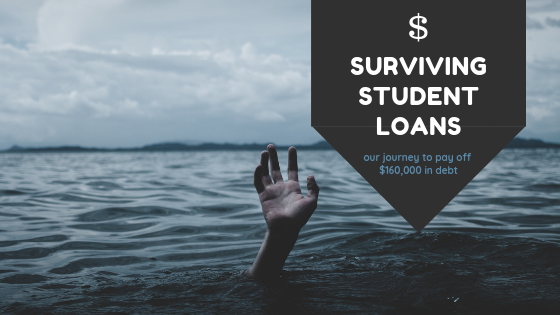 Why I went to college

This is not a simple answer as it is a multifaceted problem with lots of factors that affected my decision. My home life in high school really sucked. Without going into details let me just say I had a need to escape and get away from my situation and college was the easiest path out for a upper-middle-class white girl with stellar grades.

I had worked very hard and earned a full ride scholarship and research position at a college across the country studying astrophysics. This was my ticket away from my current situation. I had doubts about whether or not astronomy was really what I wanted to study. I’m an introvert but I thought I might perhaps get lonely cooped up in a laboratory or observatory crunching numbers all day, but it was my way out. I also wasn’t entirely comfortable with being the only girl in the room in most situations. Yeah, there are tons of movements for women in science these days, but back then I worked entirely with men - mostly socially awkward men.

My senior year of high school everything changed. My home, life that I so needed to get away from, took its self away from me as my mom moved across the country leaving me behind. I had a brief moment of freedom before fear and panic set in. I no longer needed to escape and get away, I no long HAD to pursue this dream to escape the life I had. Doors were open up to me everywhere and opportunities I had never before accepted were now on the table. I was totally lost. I had no clue what I wanted to do with my life when I didn’t HAVE to do something to escape from my mom and step-dad.

At this point, I probably should have evaluated if I even wanted to go to college but the expectation was so firmly set on me I never even considered not going as an option. My older sister had taken a semester off to travel and then attended sporadically and I saw behind the scenes how much frustration and anger it caused my parents. I was not one to disappoint and break expectations.

My dad grew up in a very poor family and education wasn’t an option. My dad worked a job he hated for 30 years because it paid well and he could provide better for me and my sister than he ever had. He made sacrifices of his time and sanity for us and I didn’t want that to be in vain. I wanted to make him proud.

Since I felt lost and I had just started dating the guy I was pretty sure was going to be the one, I decided to stay in our home town and attend our local university, Northern Arizona University. My first year of college was paid for. I had stellar grades and the school was in need of female students to meet their minority requirements. My parents had always paid for my sister’s schooling whenever she went so I expected they’d do the same for me. Since I didn’t have tuition or room and board fees I asked my parents to pay for my supplies. My dad happily bought all the supplies I needed for my art classes and I was ready to go.

A few months into my freshman year Jason proposed to me. We had already decided to move across the country when we got married and the proposal and engagement was really just a formality to plans we had already made.

Like I said above I am not one to disappoint my family, but in getting married young I knew I would be disappointing them. I timidly sat at dinner with my dad the day after Jason proposed as we discussed my plans for the future. He expressed that he wanted me to wait until after I graduated college to get married and I quietly told him that living together like that wasn’t going to be an option for me and Jason.

I sat in silence as I watched the range of emotions on his face. He held them all back verbally but they were there in his eyes; disappointment, frustration, worry. I saw all the sacrifices he had made so I could have a better life flash before his eyes and I desperately didn’t want any of them to be in vain. At last, he spoke, “Well you are going to have to pay for it on your own then if you get married.” He paused and I nodded that I understood and he added, “Please do finish and get your degree for me though.” I quietly promised I would, at least in this I knew I wouldn’t disappoint him.

The summer between my freshman and sophomore year we got married, packed up our stuff, and moved across the country.

I loved telling and writing stories and film took a front row choice for a while as my life became surrounded by Jason’s dreams of film. For a little while, that is what I pursued, but after a semester, I realized my desire for film was merely a desire to make money to get away. I still very much had the instinct to ‘get away’ built into my identity.

After a few months of being in our new world across the country, I realized I was still operating under my old ‘get away’ mentality and I realized that while I loved stories what I really desired was to help people process and work through their stories. It was with great fear and trepidation that I brought the subject up to Jason. I didn’t want to tell my family I was changing majors because I was afraid they’d see it as a sign I wasn’t going to follow through and get my degree after getting married. I didn’t want to tell Jason I wanted to change my degree because I still very much wanted our vision of making movies together one day to come true; I just really wanted to be a counselor until that day came.

He supported my vision as much as he could back then and I began researching the school that would be best for me. Back then online school wasn’t as big, but I had to work to support us through college so I chose the University of Pheonix and got everything taken care of to get enrolled and payment taken care of. I had full scholarships to NAU that I hadn’t ever done anything to get and the financial advisor at UoP assured me they’d apply all applicable scholarships I didn’t need to worry, so I didn’t.

I’ll be honest, in the process, I never once asked my admissions counselor how much my school would cost. I never once asked anything about finances beyond expressing that I had previously received scholarships. I gave them my Fasfa info and they told me I didn’t need a co-signer on my loans and they took care of everything. Once a quarter I got an email from Sallie Mae informing me they had released the money to UoP and for me to confirm my enrollment, but the email never gave an amount in it.

My final semester a financial advisor helped me get all my loans into one place and one payment. The advisor told me my first payment wasn’t due until 6 months after I finished schooling. I had wanted to get a Masters degree so I continued on for a little while after my bachelor’s but I was worn out. I had gotten great grades and always strived for perfection, then I took a class (I don’t even remember which one) and I got a C and I didn’t even care. That was when I knew I needed to stop and take a break.

Little Miss M was born a few months later and I stopped working. I don’t think Jason and I really discussed this at all or were intentional about it. We moved the office out of our condo in anticipation of M’s arrival and in the move there wasn’t a desk for me. I worked from home for a little while but Jason assigned me less and less work and then after she was born he just never included me again or asked for anything and thus I became a college graduate stay at home mom with thousands of dollars in debt without ever really meaning to.

The journey to pay off the loans

When our student loan repayment began M had just been born. I was tired and exhausted. I set-up auto pay because we got a small interest break for doing so. I had no clue what our repayment term was. I knew that all the promises from the financial advisors were crap - small monthly payments and we could pay back when we wanted and how we wanted. Our payment was $1100 a month! Ouch and now I’m suddenly a stay at home mom with no income?

To say I was overwhelmed would really be an understatement. I was so ridiculously under-equipped for the task and burden of paying off the loans. Without really any intention or research I made the decision that we could probably afford to pay an extra $100 a month on our loans which would give us a little over one extra payment a year. I had no clue what this would do for us in the long run, but I knew it was probably a good place to start.

We had been so dedicated to staying out of debt up until this point. We drove one car for many years, some days putting over 200 miles on it driving Jason to school and me to work and back and forth a time or two in between. In fact, before we got married I had sold my car so we could pay off Jason’s because I really hated the idea of debt, and yet somehow debt for school just never registered on my radar as debt until the overwhelming payment hit me in the face.

I’ll be honest I have questioned along this journey if we’ll ever escape from the horrible decisions we made to get these student loans. Watching 25% of our income each month go straight to these loans has been completely deflating and demotivating. I can’t picture what life will be like without these payments around our neck. If you see me dazed and wondering around the grocery store in the next few weeks, it’s because I can buy the expensive meat and I don’t know what to do with myself!