The death that changed my life

Jason had a great grandmother that lived to nearly 110. She passed away two weeks before her birthday and for the first 10 years of our marriage, I had the privilege of getting to know her and hear about her life. She slowly moved towards dementia and her ability to share her life stories faded away. She faced so many challenges in her life and lived through 2 world wars. As I would sit with her talking I had always wished I could have read her journal from when she was younger so I could better understand all that she went through.

I wrote out my experience of the events below the day after they happened so that if one day any of my children or grandchildren were ever curious about my life, the life I have outside of them, they would be able to learn more. This event most definitely affected and shaped me and had trickle-down effects on my life for years to come. So here it is, Micah’s story. 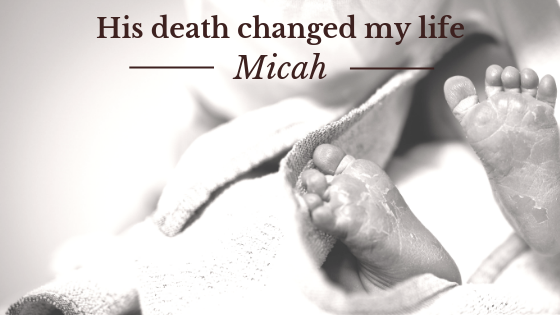 At 36 weeks pregnant, that’s considered early full term, my friend noticed some spotting. It was after hours and her doctor sent her into the hospital where they hooked her up to all the monitors and discovered Micah’s heart was no longer beating. She perhaps was in shock, but she was not without hope. She called several of us and asked us to pray boldly for a miracle. Along with one other friend, I went straight to the hospital to be with her.

We prayed for hours as her body went into labor. I had no shadow of a doubt in my mind that all would be well. As I prayed I just kept seeing Micah be born and take a sudden gasp of air, over and over I saw it. I believed this was God’s way of encouraging us to keep praying and giving us hope that the miracle we wanted was about to happen.

It became time to push and she allowed us to stay in the room. I held her leg for her and he came out. It was fast, she barely had to push. His limp body slid into the doctor's hand and she quickly moved him over to me where my body was blocking him from my friend’s sight. He was completely tangled in his umbilical cord, and his little boy was already starting to decay. It was immediately clear to me that he was not going to take a breath.

I looked across the table at our other friend trying to communicate the truth to her with my eyes. The father began sobbing as he moved around the doctor to see the baby as she delicately tried to untangle him without causing his skin and body further damage. The nurse, who specialized in stillbirths began holding our friend's hand and preparing her for what she was about to see. She wasn’t giving up hope though and insisted we keep praying.

The nurse, who was a stellar rock star, began to wash him off and gently push back the skin that was beginning to peel off. It was a delicate task and I moved in to help her, knowing I didn’t want my friend to see him as he was and have that be her memory of him. For the next few minutes, we very carefully cleaned him up, wrapped him, and passed him to his mom.

We sat there and prayed, no one shedding a tear except dad. After about 30 minutes it dawned on all of us that there was family in the waiting room who needed to know what the outcome was. My other friend was holding the father as he sobbed, so I nodded realizing it was my job to go inform them all.

I silently walked from the room and shut the door. I took a brief moment and let a silent sob shake my body to its core before I pulled myself together and headed into the family. Both grandmothers, a grandfather, and aunts and uncles all jumped up when I entered the room. A slight shake of my head was all I had to do to communicate the sad truth. The grandmother closest to me buckled under the weight of the sorrow and I caught her and held her up while she sobbed against me. I watched hope leave the eyes of everyone in the room, that is an experience I hope very few ever have to experience.

We all went back to the room, so everyone could say hello and goodbye before they had to take Micah to the cold room so he wouldn’t decay further. I only vaguely remember everything from here, I tried to be strong and not cry. I held grandmothers hand’s, I held a tiny body, I hugged my friend, and everyone prayed, except me. I was so incredibly numb.

Nearly seven years have passed since Micah’s birth and death and I can honestly say he changed my life in so many ways. I lost my hope for a while, but it was a shallow hope based on things so temporal and unimportant that it wasn’t worth having in the first place. It took me a while, but I’ve learned to hope again, but this time it is a stronger sturdier hope based on things far more lasting.